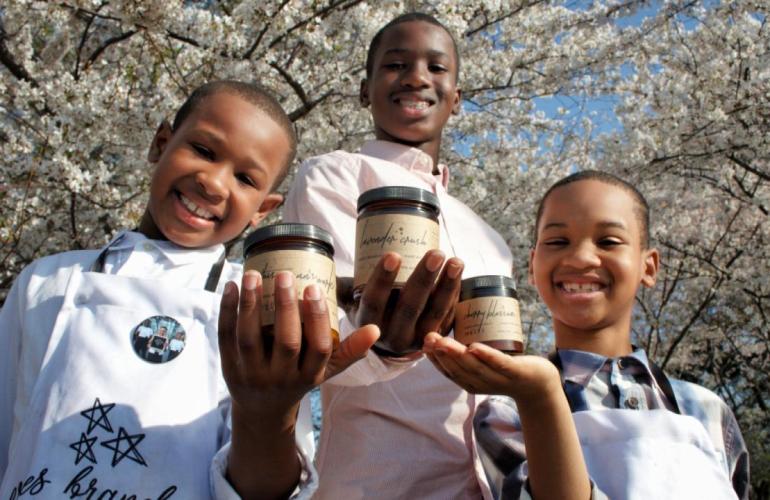 Collin, Ryan, and Austin Gill wanted their own money to buy video games and toys. The brothers ended up starting their own candle business to fund their own wants. However, the business is now impacting their community in an amazing way.

The Gill brothers were encouraged by their parents to start their own business as other young people are beginning to do. “We asked our mom what her favorite thing to buy [is] … she said bath bombs, but there [were] too [many[ chemicals and there’s a lot of [processes], so the next thing she said was candles,” 11-year-old Ryan told InsideEdition.com.

Celena Gill, mom to the three boys, took a candle-making class to help teach the boys how to make their own. “Then we started testing each candle,” oldest brother Collin explained. “It took a couple weeks to get a good formula and once we started selling, we almost sold out the first vending event we had.”

The boys eventually named their business “Frères Branchiaux,” (pronounced “frair bron-shee-oh”) which is “Gill brothers” in French. They make all of their candles in their home in Indian Head, Maryland. Since they began their business, the boys have sold over 10,000 candles!

Though they certainly have enough money for their video games and toys now, the Gill brothers also made it a point to give back. They donate a part of their proceeds to homeless shelters in the Washington, D.C. area which is making a positive impact. “They have been really invested and being a part of a community will inspire kids to do the same thing,” mom Celena added.

The brothers are currently raising money to purchase their own candle truck. hope to expand their business soon with a candle truck. Their plan is to employ the homeless and create jobs through the truck as well. Incredible!

Watch more of their story below…