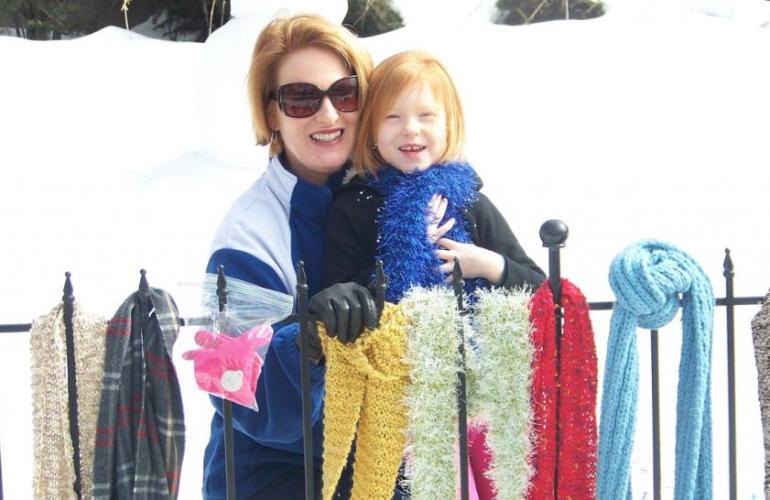 A family in Indiana is continuing a holiday tradition to keep people in their neighborhood warm this winter!

Three years ago, Lynda Salisbury and her family created a “blessing fence” covered in winter clothing like coats, hats and scarves for those who need them! And the tradition still goes on. “I was on Facebook and saw a city that was hanging scarves on the trees in their park for homeless people,” Lynda told Inside Edition. I thought, ‘Well I wonder if we could do this in our neighborhood because we live in an economically diverse area of town.'”

Lynda simply put out a Facebook status, asking people for scarves and gloves to put on her own fence. People responded in droves, so the items were hung and others in need were able to take what they wanted.  The idea quickly took off! “People would just show up and the items would be gone. I don’t keep track. It’s anonymous giving for anonymous receivers,” Lynda said.

A wooden sign of the fence openly welcomes folks in the neighborhood. “Take what you need… leave the rest. May you always feel warm, cozy and blessed!” it reads.

Lynda, her daughter Olivia, and her husband Scott take care of the fence each year, but, this season, others in the neighborhood began placing items on it in early October. The mom thought it was kind of early, but the items quickly disappeared. She then understood the impact of what she and her family are doing. “We have a need in the community where these hardworking people are making it paycheck-to-paycheck. If we can give something to help them get through the winter, it’s beneficial for them, but for the giver, it’s a blessing also,” Lynda stated.

It’s wonderful to see that Lynda’s revamped idea is doing a lot of good for her community!