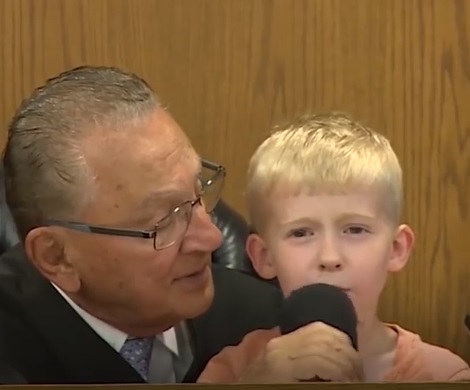 A man recently brought his five-year-old son Jacob with him to court, thinking he was just going to be paying off a parking ticket.

The judge on the case immediately took notice of the little boy in his courtroom, even bringing Jacob up to sit with him. He asked the kindergartner about school and what he wanted to be when he grew up. The older man even put Jacob in the judge’s seat, asking the little boy to pick his dad’s fine!

Watch the cute video below!

It was all in good fun, though. The judge ultimately let the dad off the hook, telling the father to instead use that money to go out for breakfast with his son. Definitely a video that made me smile this morning!

Y’all help me wish my gorgeous sister @_itsladylex a happy 25th birthday!!! Alexis, I’m so proud of your accomplishments but, even more so, the hardworking, dedicated woman committed to God, family, and her field of social work.
Idk where and when, but this summer...Imma summer. With my legs out. #Responsibly. I’m way overdue.
In the hustle and bustle, sometimes you forget to slow down and just express gratitude. I’m thankful for another day of life. Family and friends. Having a flexible career and still being able to work on my purpose and passions. And, of course, Y’all who rock with me. 🙏🏾❤️
More inspirational and fun content coming!!!!!
No longer holding on to anything or anyone that shouldn’t be here. Realizing now how much courage and faith that really takes.
I LOVEEE love and believe in it wholeheartedly, but I have some more self-work to do to heal and become a better me before getting serious about dating again. February almost threw me back into old patterns SMH LOL.
Not letting the frustrations of yesterday weigh me down today. Started with a morning walk to talk to God and clear my mind and now I’m ready to tackle what’s on tap for today.
The Imperfectly B Shop is live with t-shirts, hoodies and more with positive, motivational sayings to uplift you and those around you. Bold statements for bold lifestyles.
Monday morning reminder. Dreaming is just the start. Let's work on making these big goals reality. Have a great week, y'all.